Celebrating 100 years in the community.

The history of McLean & Dickey
is woven through the fabric of Orillia.

When George McLean Sr. started selling insurance in 1922, there were only a handful of cars in the area and most of the roads were unpaved. 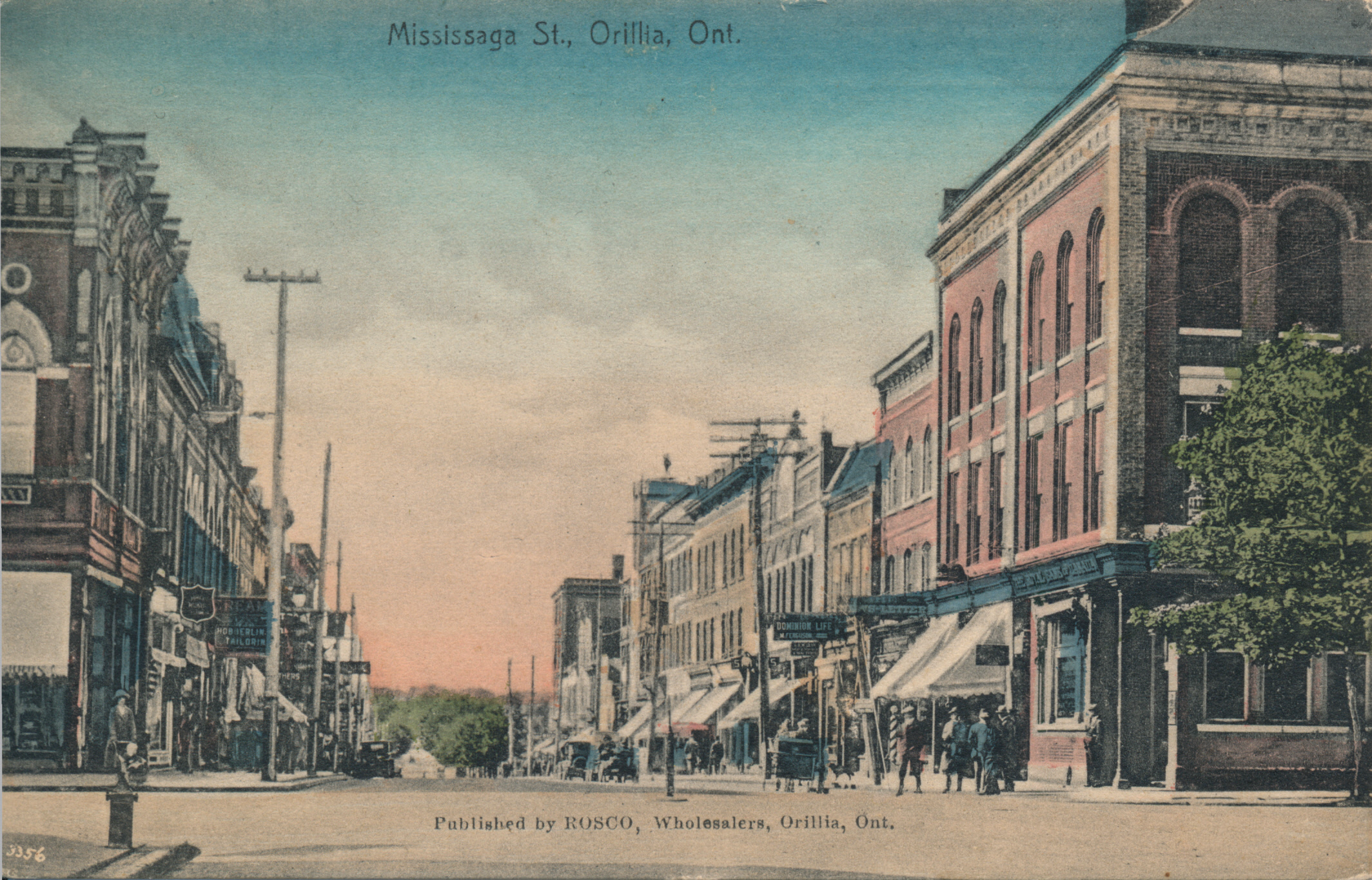 George McLean Sr., a former lumberjack, philosophy student and soldier, opened his insurance and real estate brokerage at 66 Mississaga Street East in 1922. His office was located directly across the street from another notable Orillian’s, Matthew Teefy Mulcahy, who was also an insurance and real estate broker. Image Credit: Orillia Past & Present
1924
George McLean ELECTED Mayor 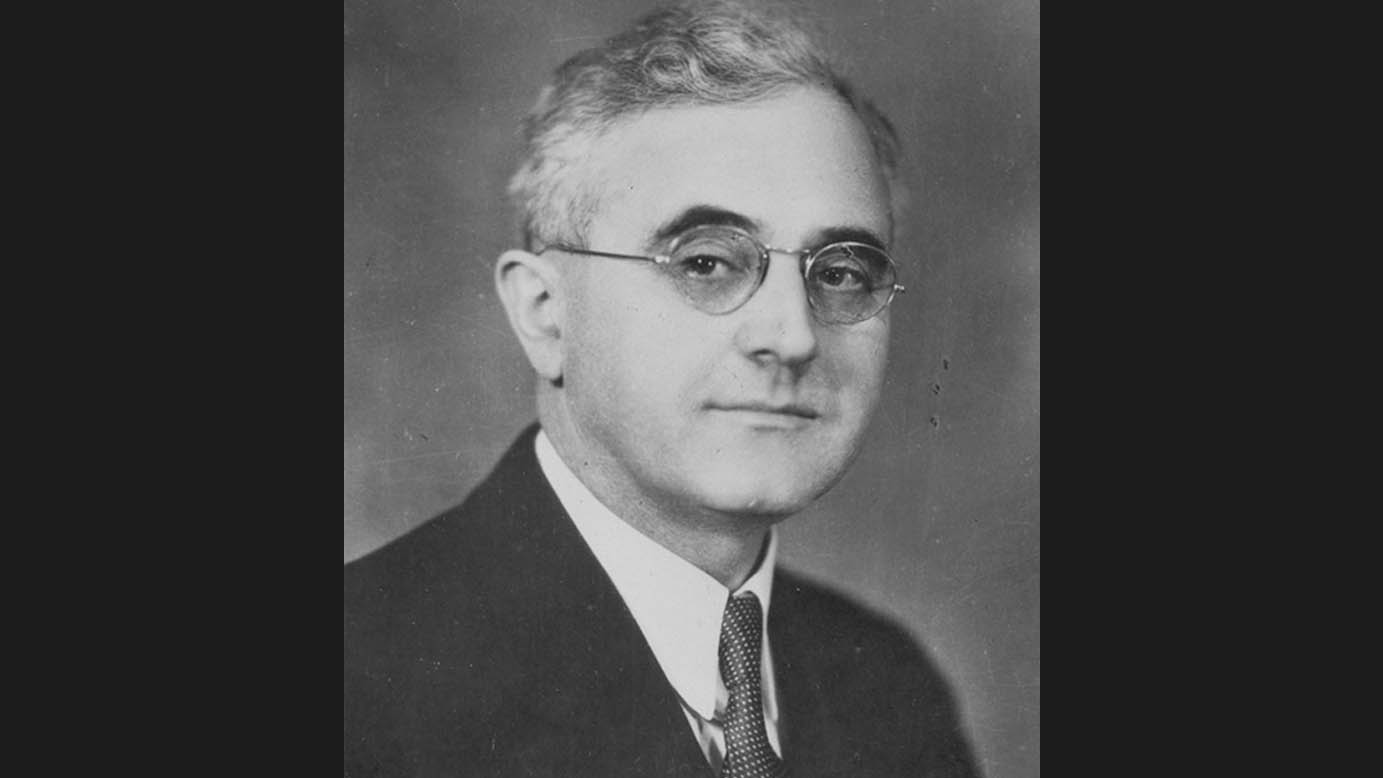 A politician at heart, George McLean was elected Mayor of Orillia in 1924. By 1930, he decided to enter federal politics and after winning the Simcoe East seat for the Liberals in 1935, served as an MP in the Mackenzie King government for two full terms. 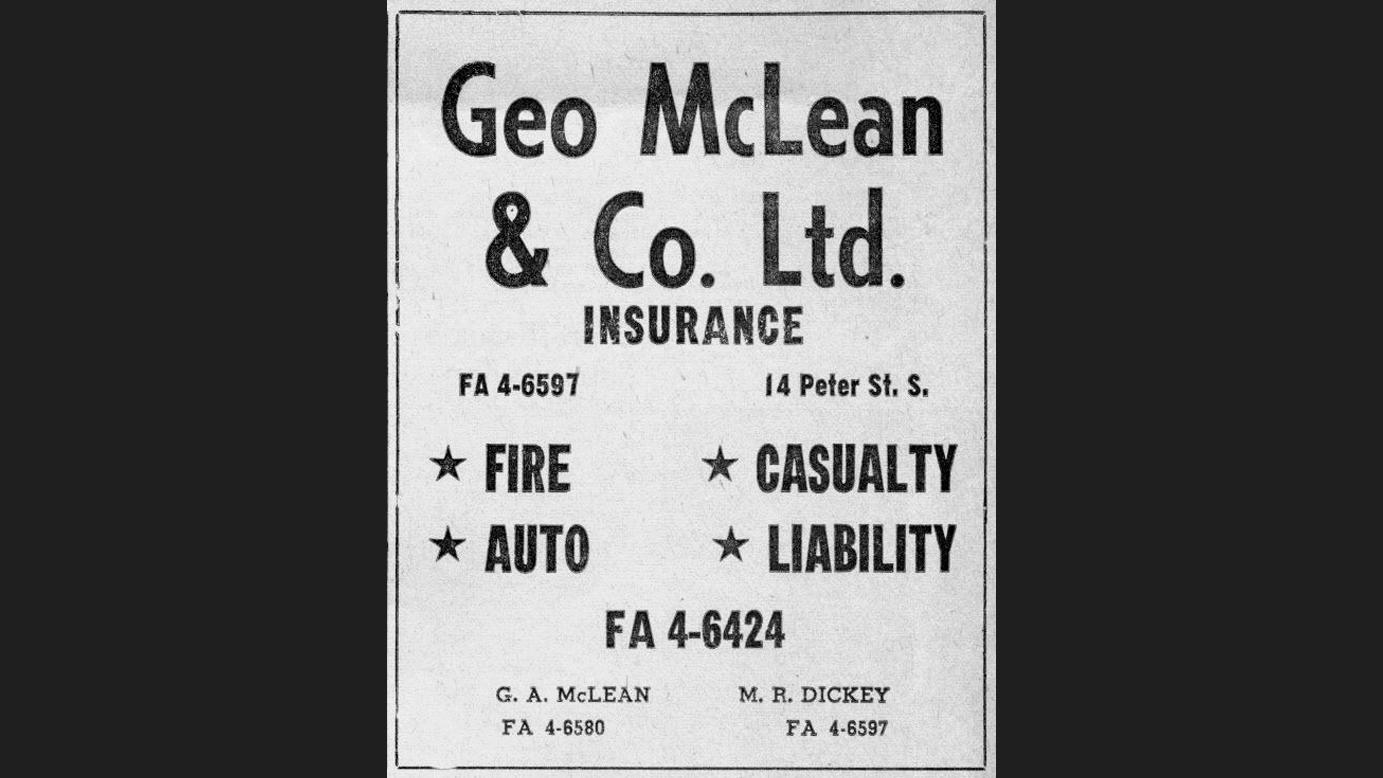 George McLean sold his insurance business to his son George Jr. in 1952. Shortly after, George Jr. brought in partner, Marwood “Dick” Dickey and in 1955 the name “McLean & Dickey” was incorporated. Over the years, McLean & Dickey developed a reputation for knowing their customers’ needs and providing exceptional personal service. Image Credit: Orillia Past & Present
Always putting the client first 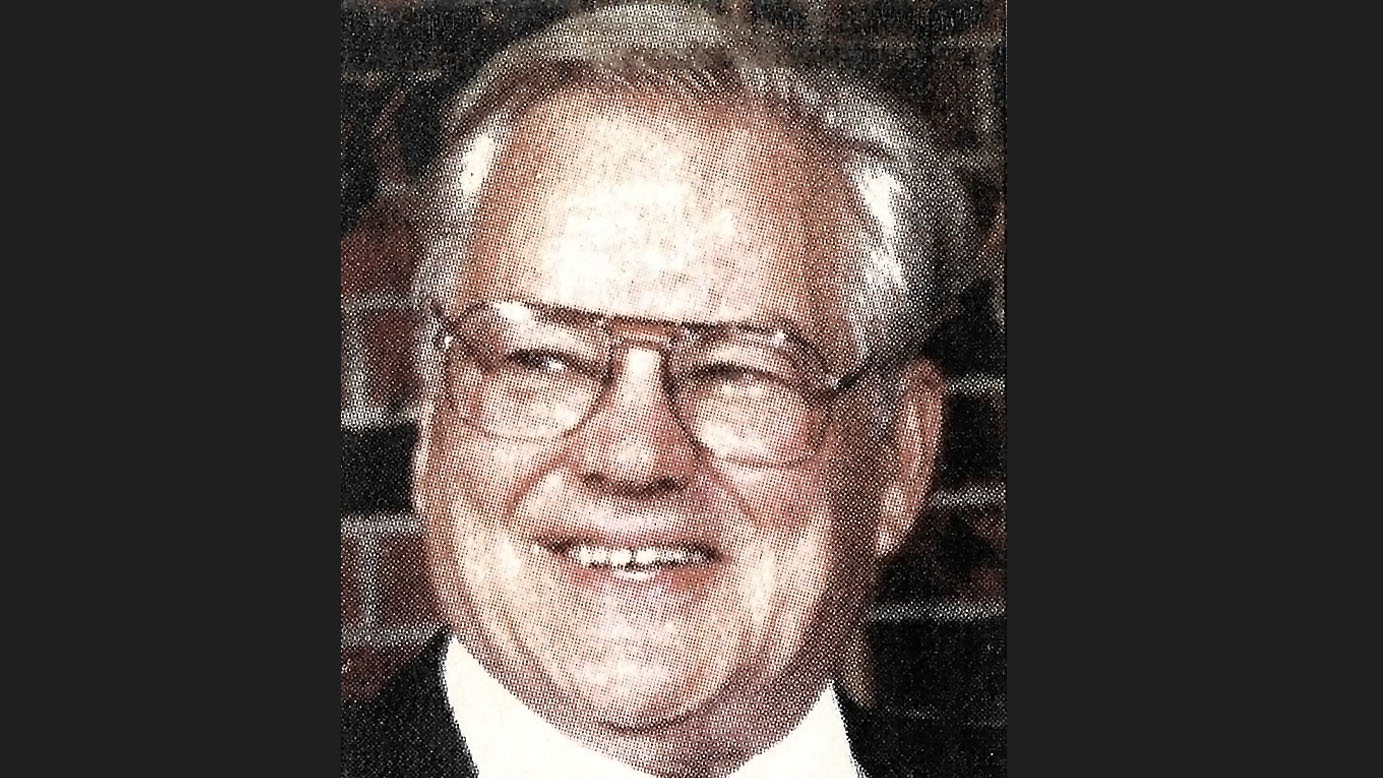 George McLean Jr. had a generous, outgoing nature and was genuinely interested in people. A former WW II pilot, George’s enthusiasm for protecting his clients’ assets often led him to chase after the local fire engine to make sure that he was on hand to help.
Marwood Dickey 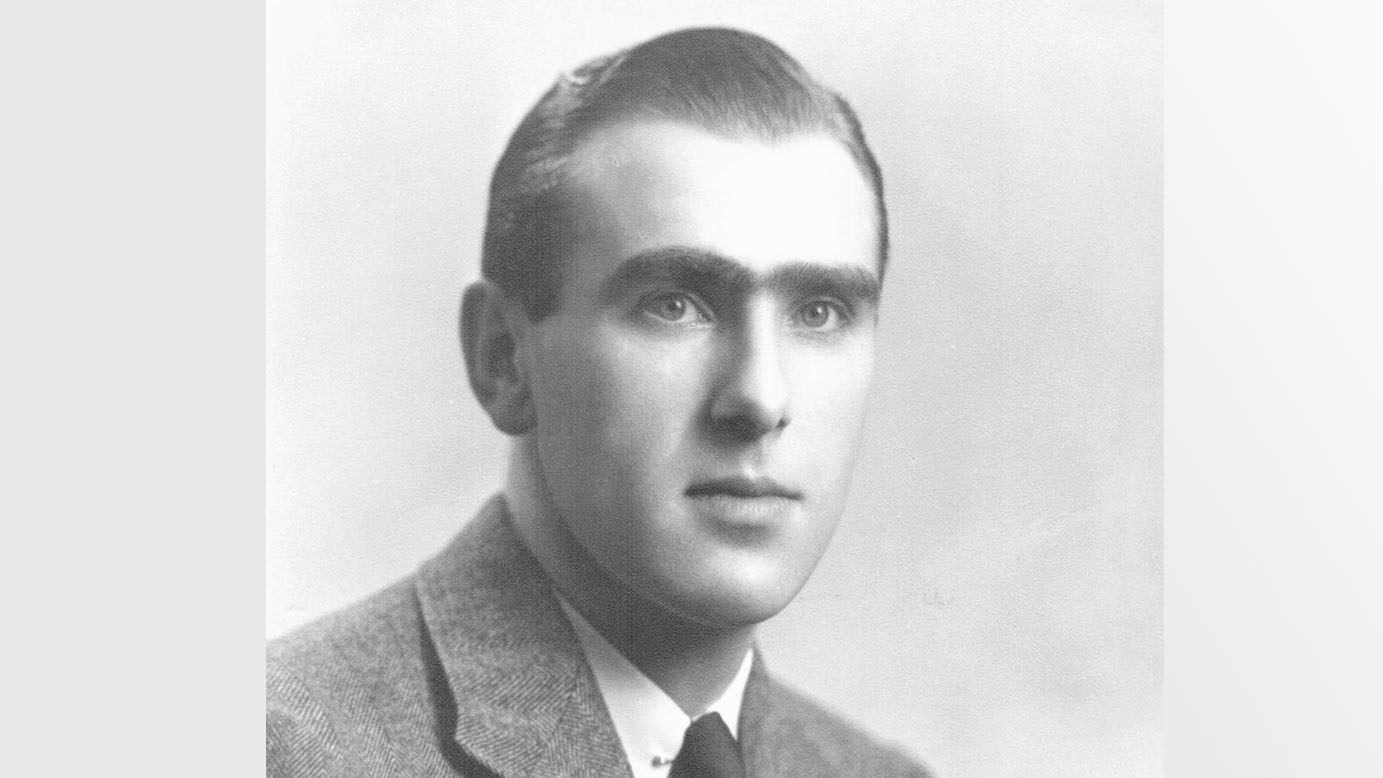 George McLean’s partner, Dick Dickey, was a former semi-pro baseball player, who served during WW II with the Royal Canadian Ordinance Corps where he received an MBE (Member of the Order of the British Empire) “in recognition of gallant and distinguished services in North West Europe.” 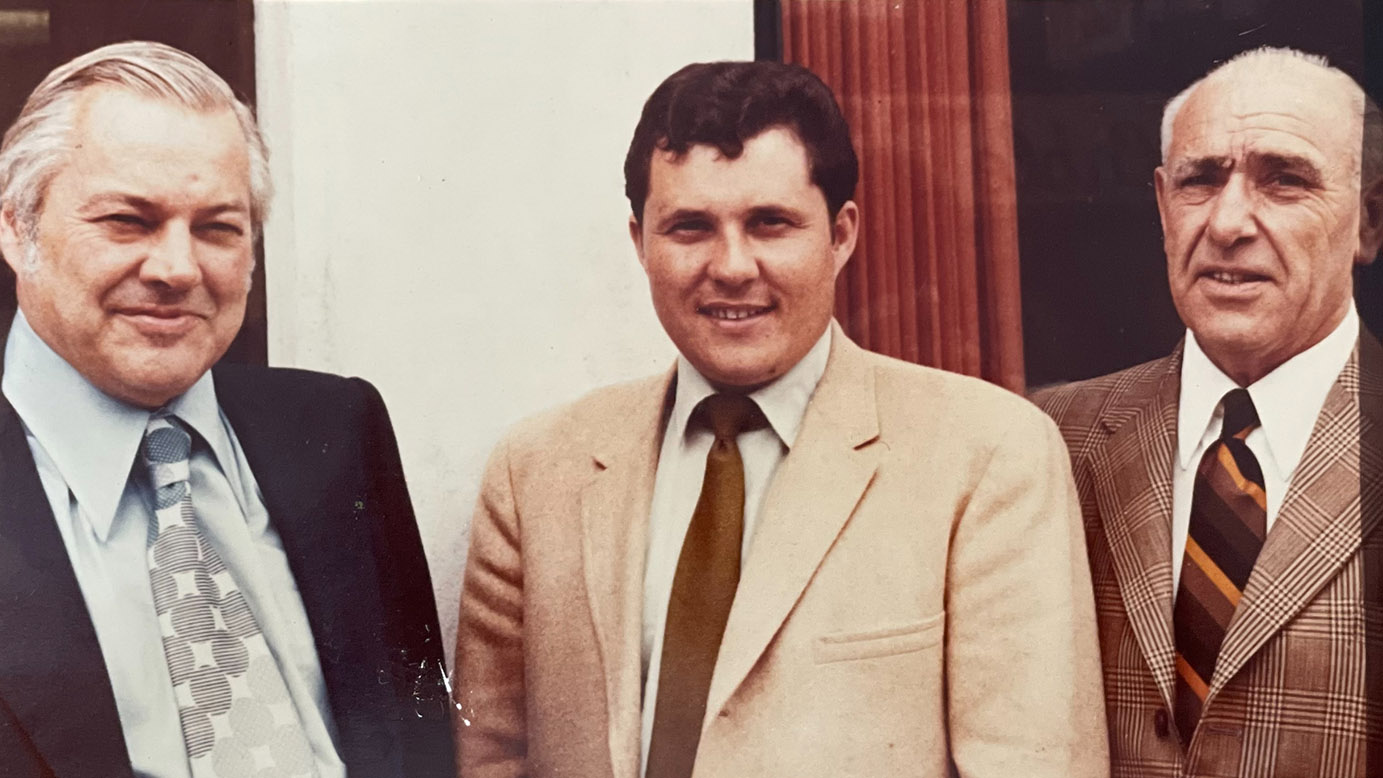 By the early 1970’s, the company was firmly established on Peter Street South in downtown Orillia in what was known as “insurance row.” Every major insurance company in Orillia was located on Peter Street at the time. Wayne MacIntosh worked as a claims adjuster for Morden & Helwig, who occupied the upper offices above McLean & Dickey on Peter Street.
1997
390 Laclie Street
The move to a bigger office 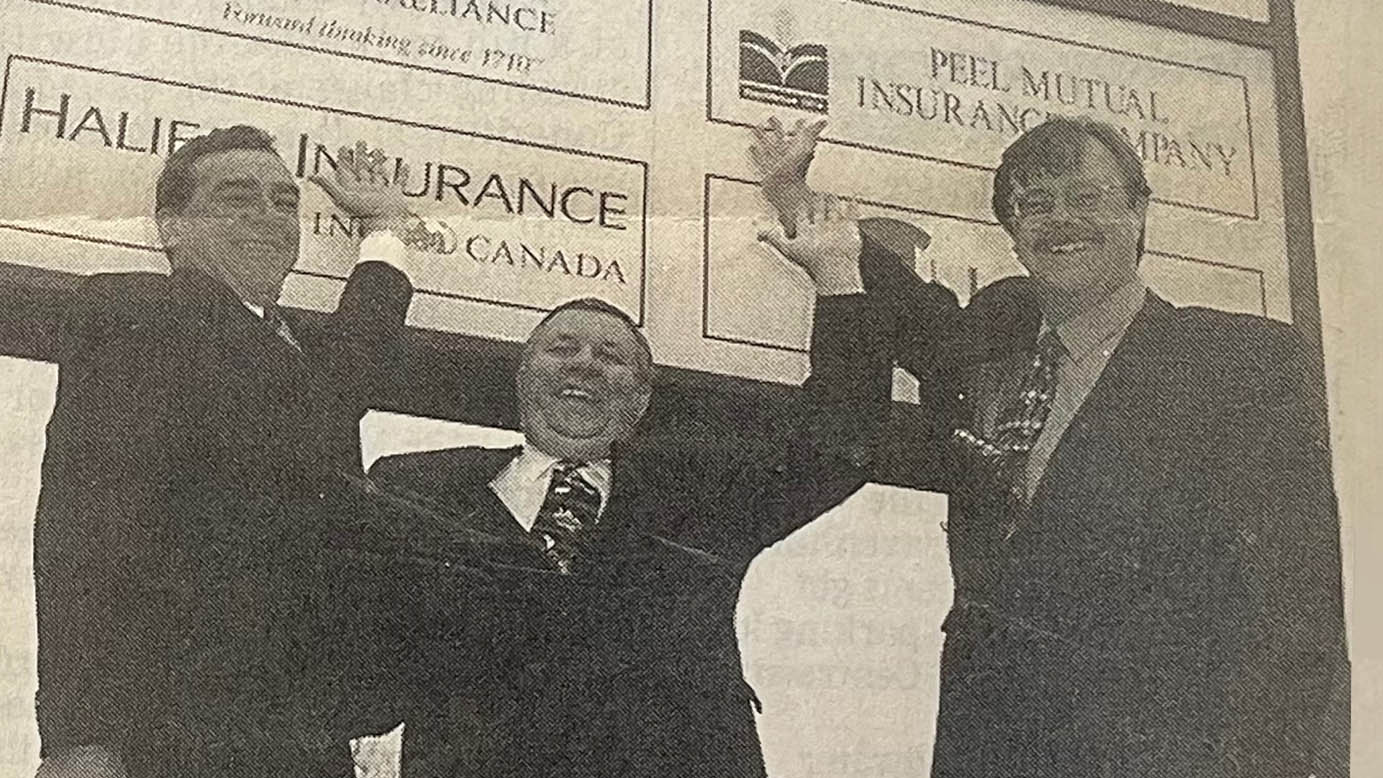 The successful partnership of Wayne Macintosh, Bill Hamilton and Bill Adams and the continued guiding principle of putting the client first were responsible for the continued growth and success of McLean & Dickey. In 1997 the company had grown to the point that it needed larger offices and so moved to a new location on Laclie Street.
Sue Mulcahy Retires 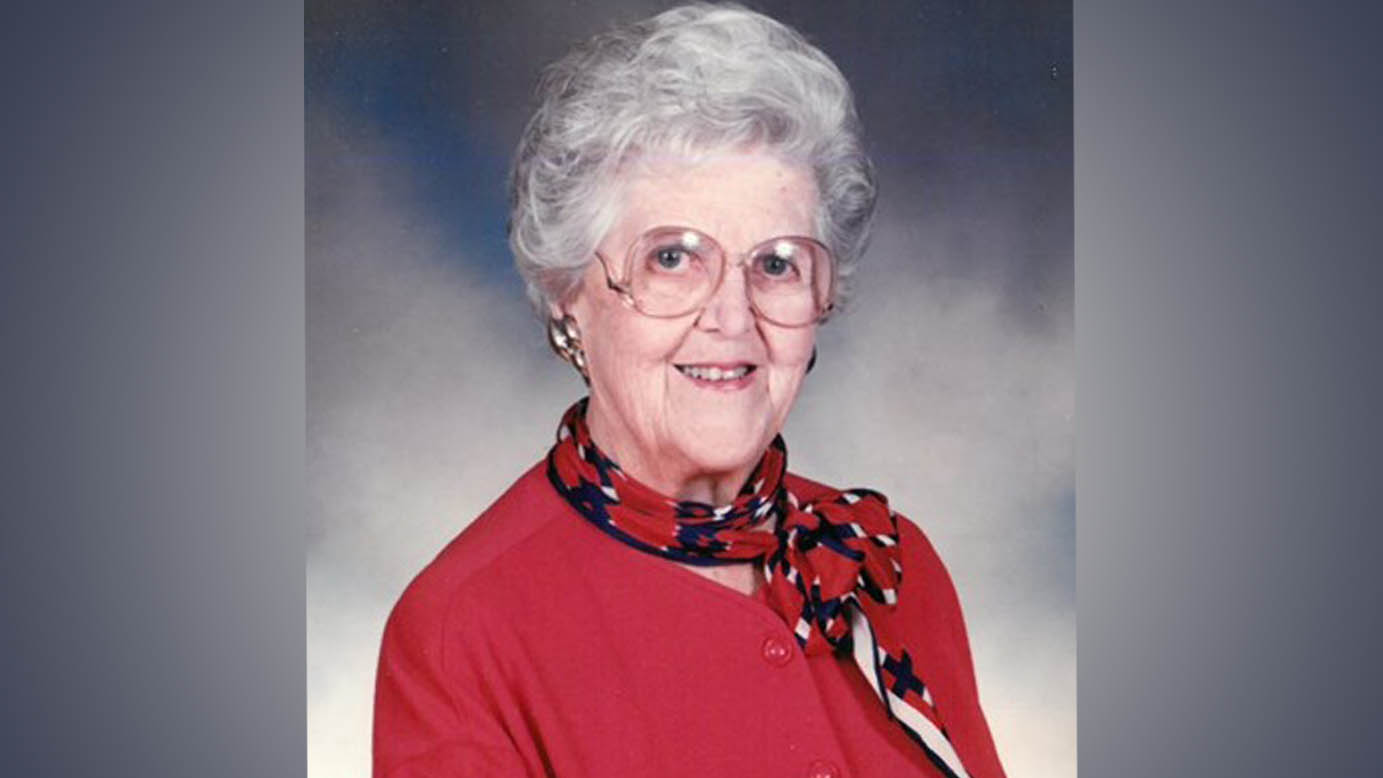 As new players entered the insurance market, including banks and direct insurers, how people purchased their insurance began to change. Many local brokers decided it was time to sell or retire and sold their businesses to McLean & Dickey.
2006
New Ownership 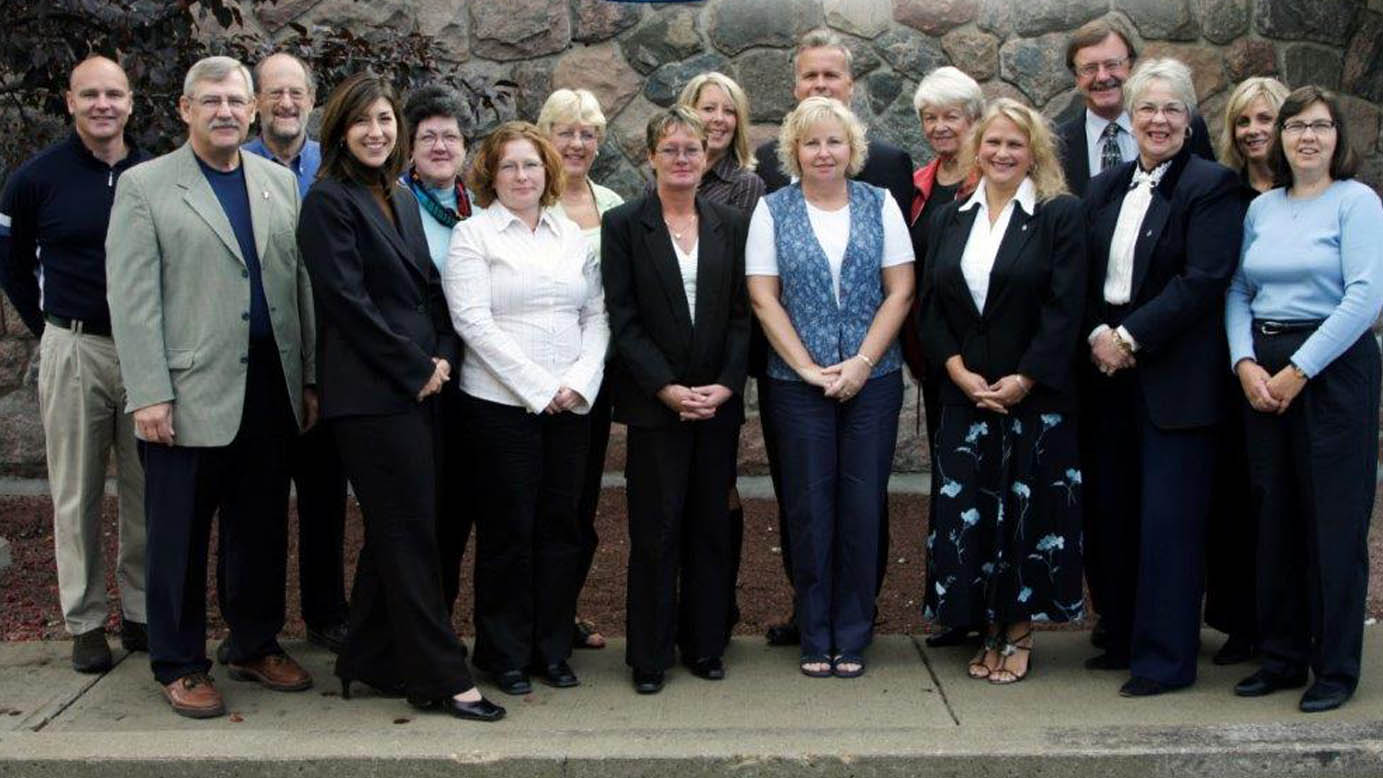 As Orillia entered the 21st century,  the three McLean & Dickey partners decided it was time to retire and put the company up for sale. The Tisi family had been looking for the opportunity to purchase a brokerage and move from the Waterloo area to a smaller community.
2007
Community Partnerships 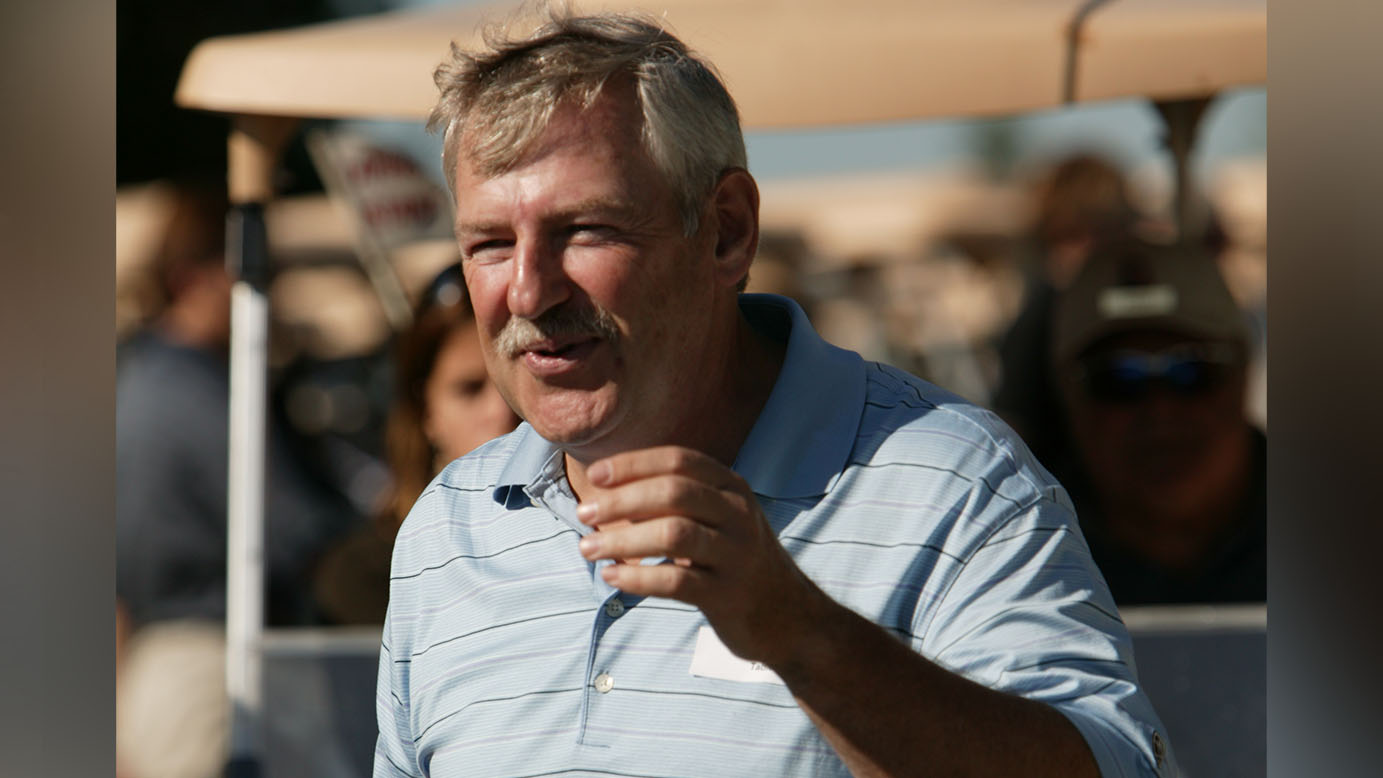 Francois Tisi, an educator and former CEO of the Ontario Teachers Insurance Plan (OTIP), threw himself into community work and focused on supporting numerous local charities and fundraising on their behalf. 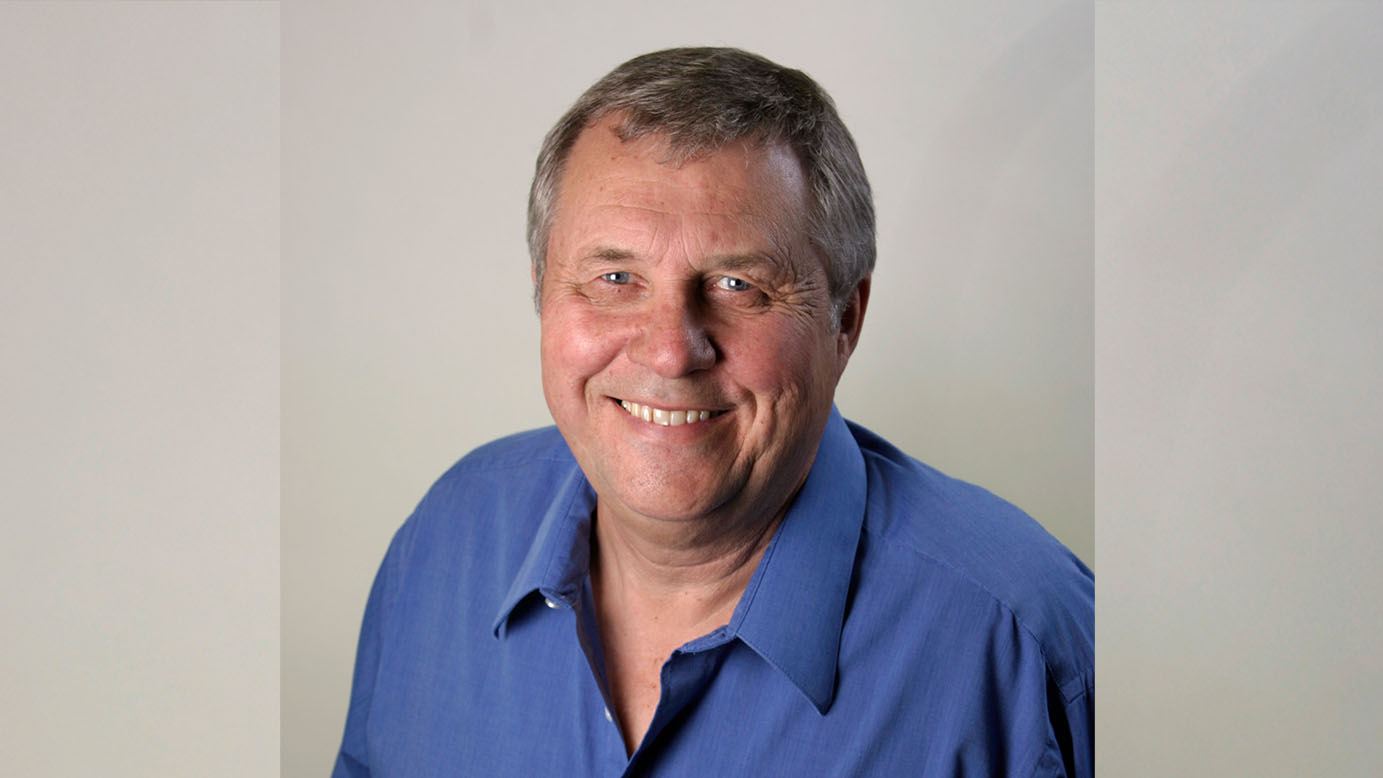 The company continued to flourish. More so when Wayne Macintosh, who had been helping with the transition to new ownership decided that retirement wasn’t really for him and came back to work for McLean & Dickey.
MD Marine joins the fold 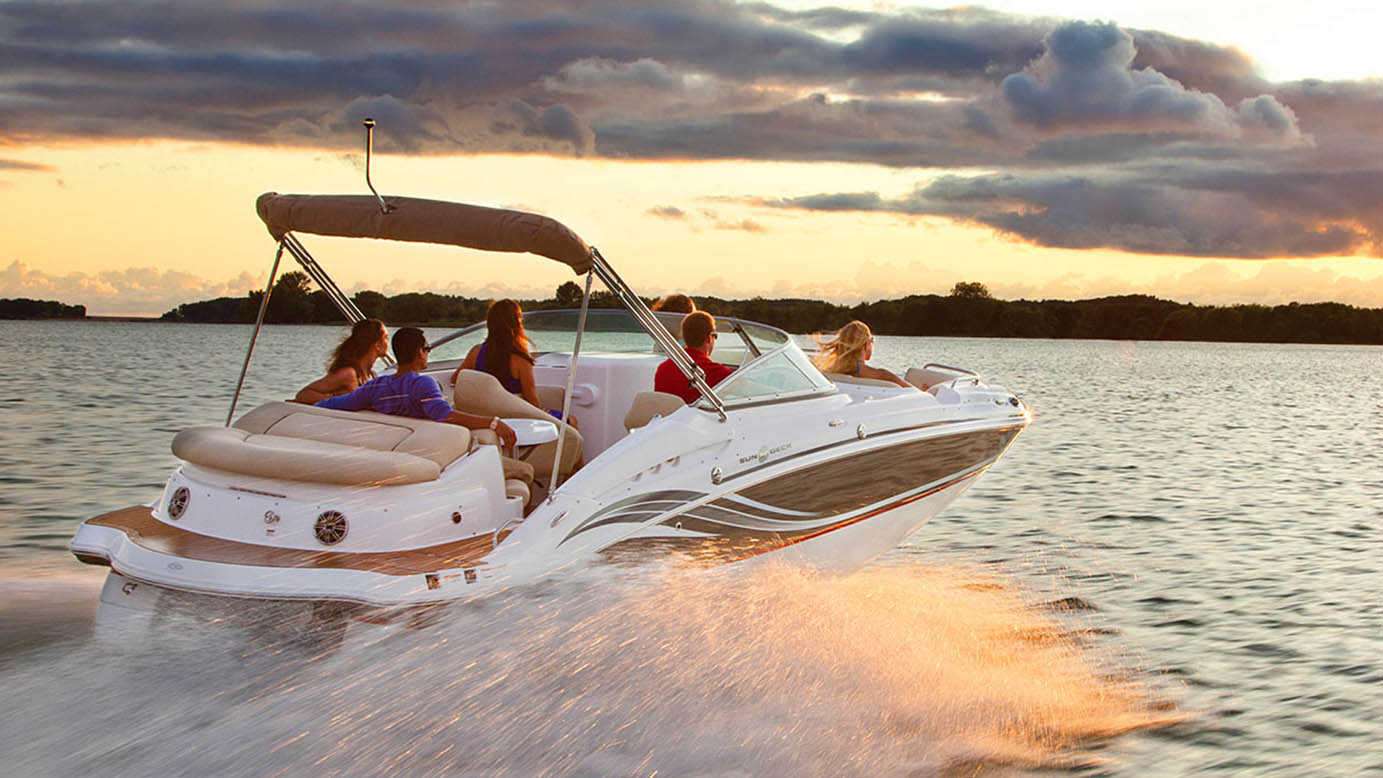 The Tisis’ vision to grow McLean & Dickey came to fruition with the establishment of MD Marine in 2007, a division specializing in pleasure craft insurance.
2021
McLean & Dickey finds a new home

After years of searching for the perfect location to house their ever-growing business and in an effort to bring McLean & Dickey and MD Marine into one large office,
2022
We celebrate 100 years 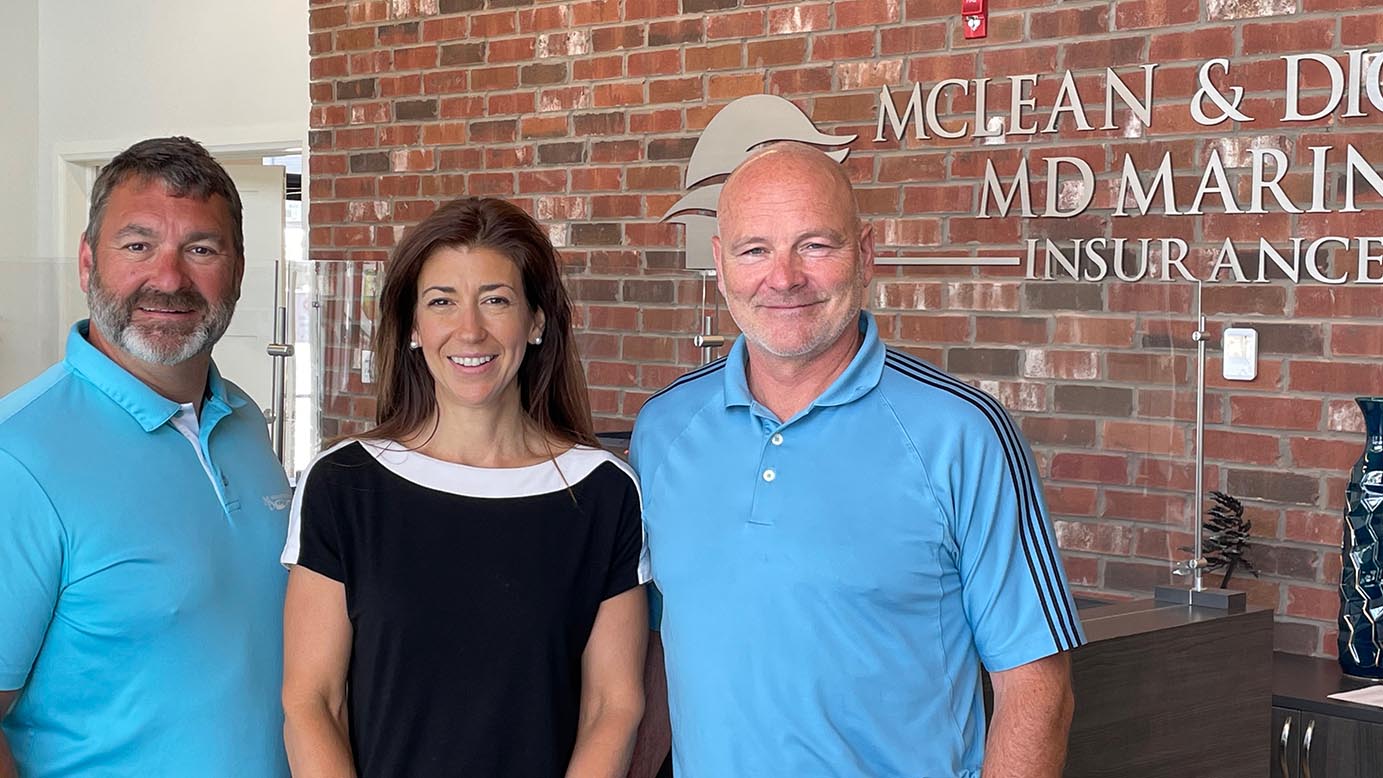 McLean & Dickey Ltd. celebrated its 100th year in business in 2022. At the same time, the company was recognized by the IBAO (Insurance Brokers Association of Ontario) for its 100 years of membership, a milestone that fewer than 10 other brokerages had attained.

Fast forward to today and McLean & Dickey is Orillia’s leading insurance company and only locally owned independent brokerage. While many things have changed since the company was founded, our reputation for understanding and serving our clients’ needs remains at the forefront of everything we do.